Every day, in workplaces and settings around the globe, workers handle a plethora of unique and hazardous chemicals. The Toxic Substance Control Act (TSCA) Chemical Substances Inventory provides information for more than 60,000 chemicals. It would be unfeasible for any professional to get to know every single chemical, the risks associated with those chemicals, and how the chemicals should be transported, handled, or disposed. The GHS, or Globally Harmonized System in short, is one way every individual who meets a hazardous chemical can understand its specific dangers. What is the GHS? Let's take a closer look.

What is the GHS?

The GHS is the Globally Harmonized System of Classification and Labelling of Chemicals. In layman's terms, the system is a globally recognizable way to properly classify and label hazardous chemicals so that:

The GHS is designed to get every country in agreement in regard to how chemicals are labeled and identified. No country is actually required to adopt the GHS for use; instead, the UN has only made a recommendation. However, the GHS is currently being put to use in at least 65 countries, including in the United States, which adopted the GHS in 2012.

Why Does the GHS Exist?

The GHS was originally developed by the United Nations in efforts to harmonize the classification and labeling of hazardous chemicals in a way that could be applied and understood on a global level. While most countries have used their own classification and labeling processes in the past, such as the Hazard Communication Standard (HCS) set forth by OSHA in the United States, a more globalized economy has naturally led to the need for an unambiguous system. In fact, there is a $1.7 trillion dollar trade of chemicals around the world that must be properly classified and labeled.

Even though standards set forth on local levels can be effective to reduce hazards within that country, having a number of entities creating their own labels and safety data sheets creates discrepancies. These discrepancies may be small or slight, but they can also still bring about confusion and heightened risks for handlers when those chemicals are transported internationally. As an adage, some countries in the past did not have a formal system for classifying or labeling chemicals at all.

The United Nations specified there was a need for a system that could be openly perceived by material handlers in any country. During the Earth Summit of 1992, the UN raised these concerns, and then set forth a plan to have an established "globally harmonized classification and compatible labeling system" by the year 2000. The first version of the GHS was published in 2003, and the UN called on other countries to adopt the GHS by 2008. The GHS has been revised for added content three times since its original creation.

What Are the Hazard Classifications and Categories of the GHS?

The types of hazards are then categorized into GHS hazard categories. These more definitive hazard categories designate the severity of the hazard within the specified hazard class. For instance, in the Health Hazard group, the Acute Toxicity classification may then be categorized by assigned numbers between 1 and 4 to show the severity of the hazard; 1 being the most dangerous and 4 the least.

What are the Nine GHS Pictograms and What Do They Represent?

All GHS pictograms have the same layout; a black silhouette-like symbol to represent the specific hazard is placed against a white background and contained inside a red square border, which is set up on a point. The standardized designs are meant to be simple to recognize and the image makes it easy to assume the implied hazard warning.

Portrays a silhouette of a human upper-body with a splay of white graphics centered over the chest area. This pictogram is associated with the following hazards: 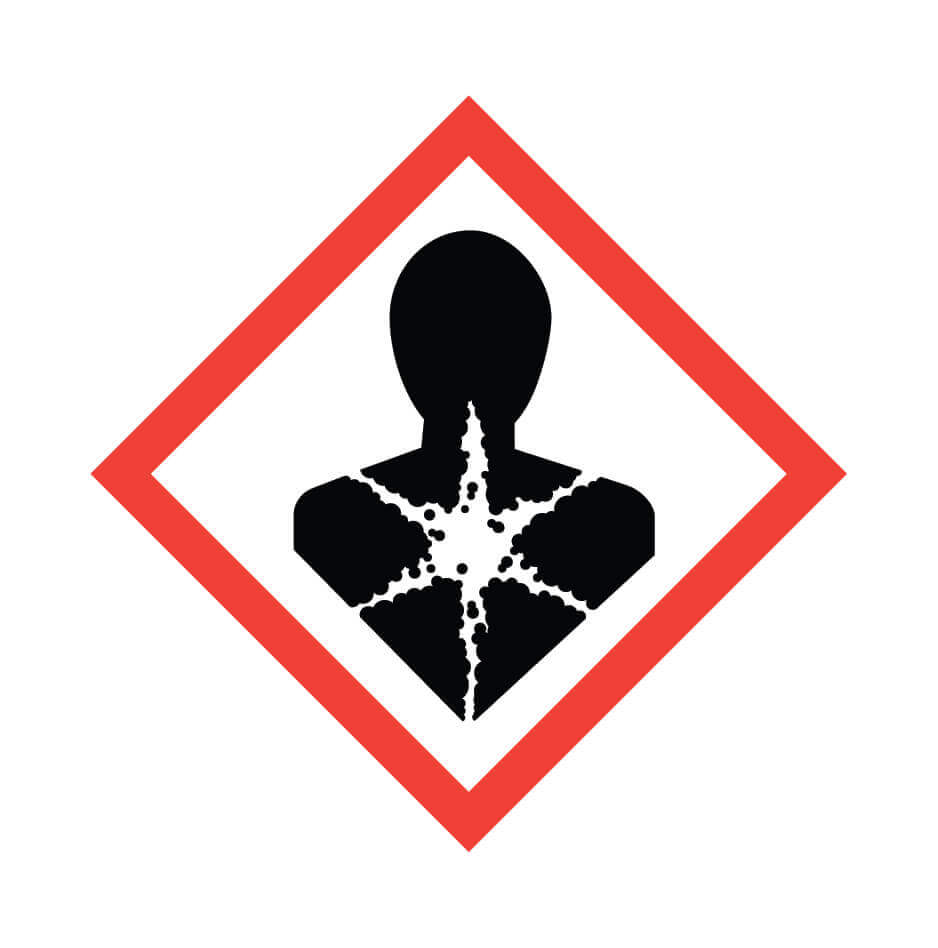 Shows a bundle of flames set over a bold black horizontal line. The pictogram is associated with: 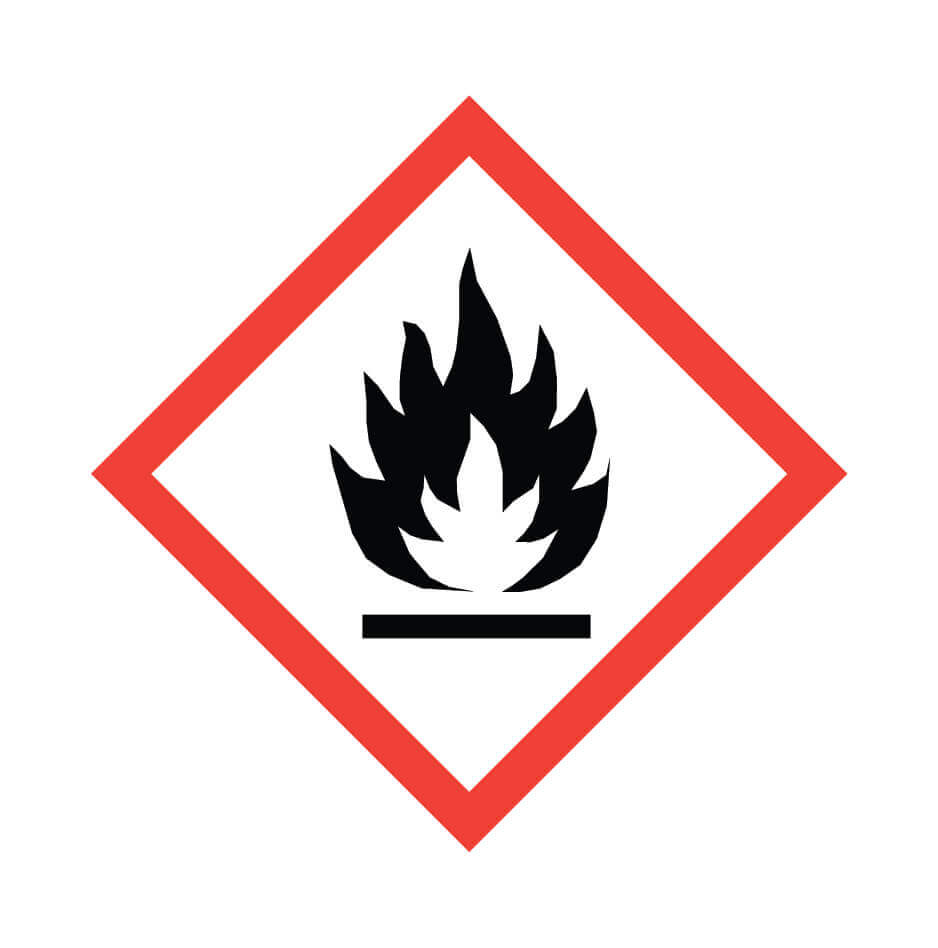 Offering a bold exclamation point only, this pictogram signifies: 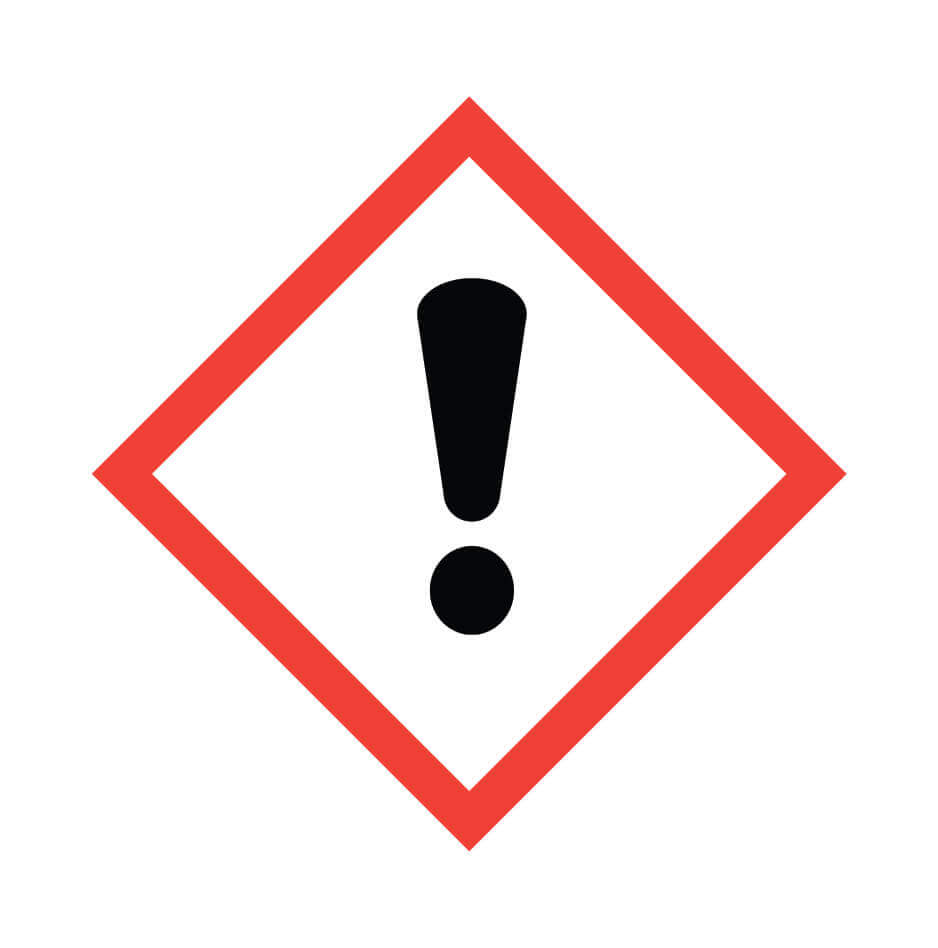 Consists of a single gas cylinder silhouette and represents gases held under pressure. 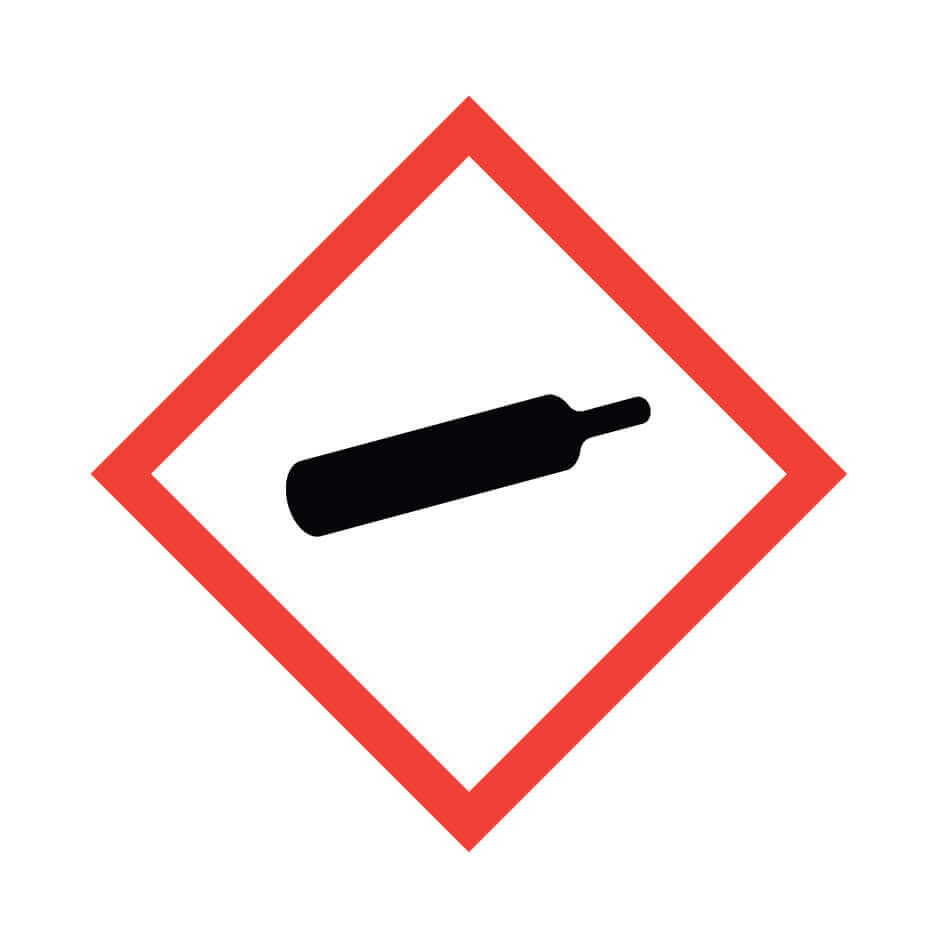 Shows test tubes of "chemicals" pouring on hands and a black surface and causing damage. Signifies contents causes or is: 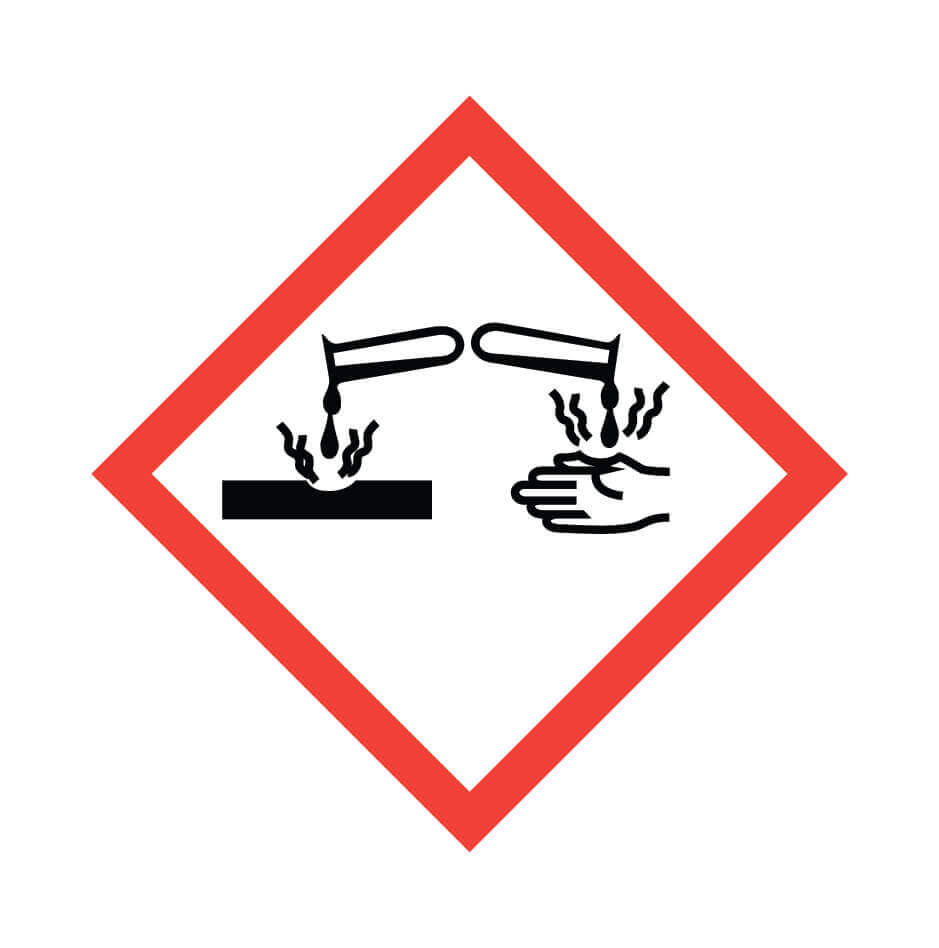 Portrays an exploding, round bomb. Means the contents are: 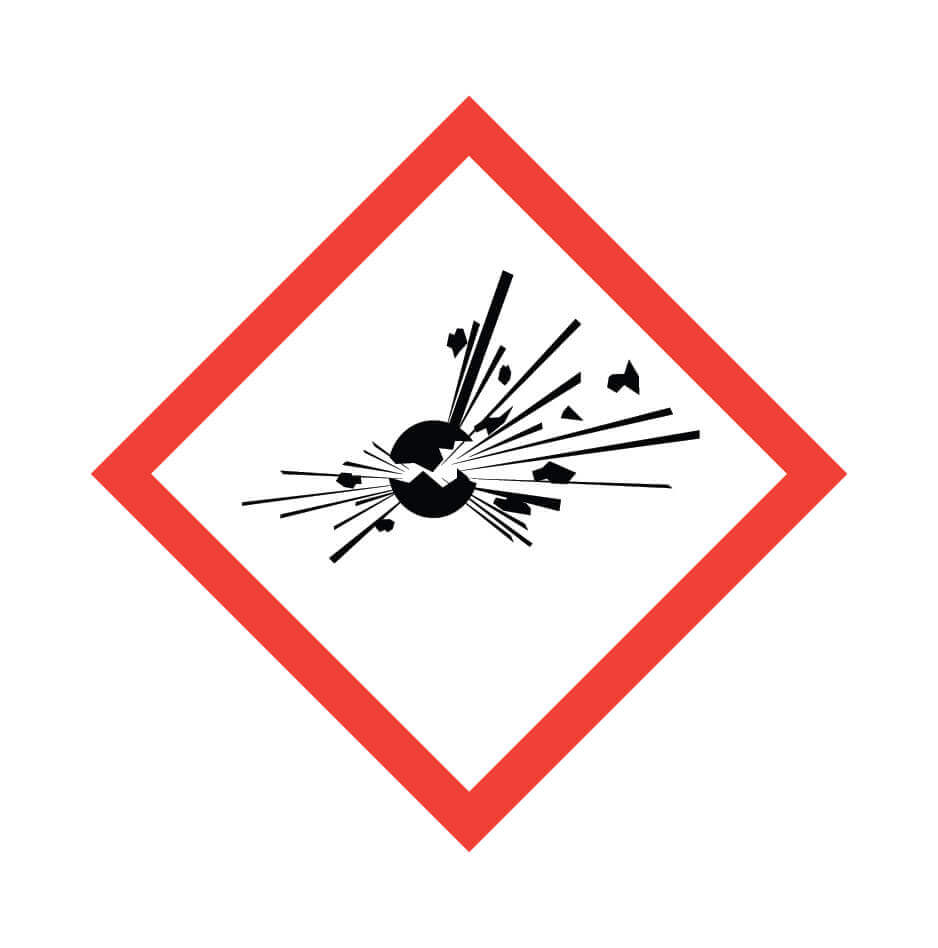 Consists of a circle in front of a bundle of flames and symbolizes oxidizers. 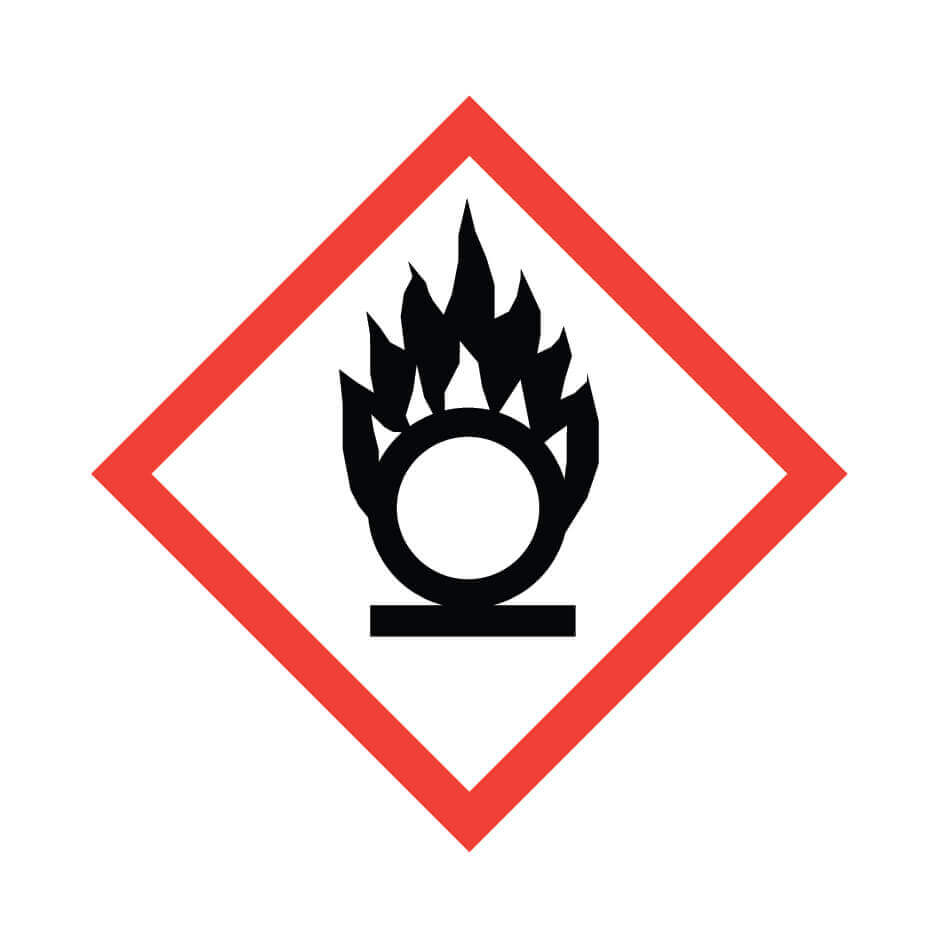 Shows a fish floating upside-down in water with a tree silhouette in the background. Symbolizes aquatic toxicity. 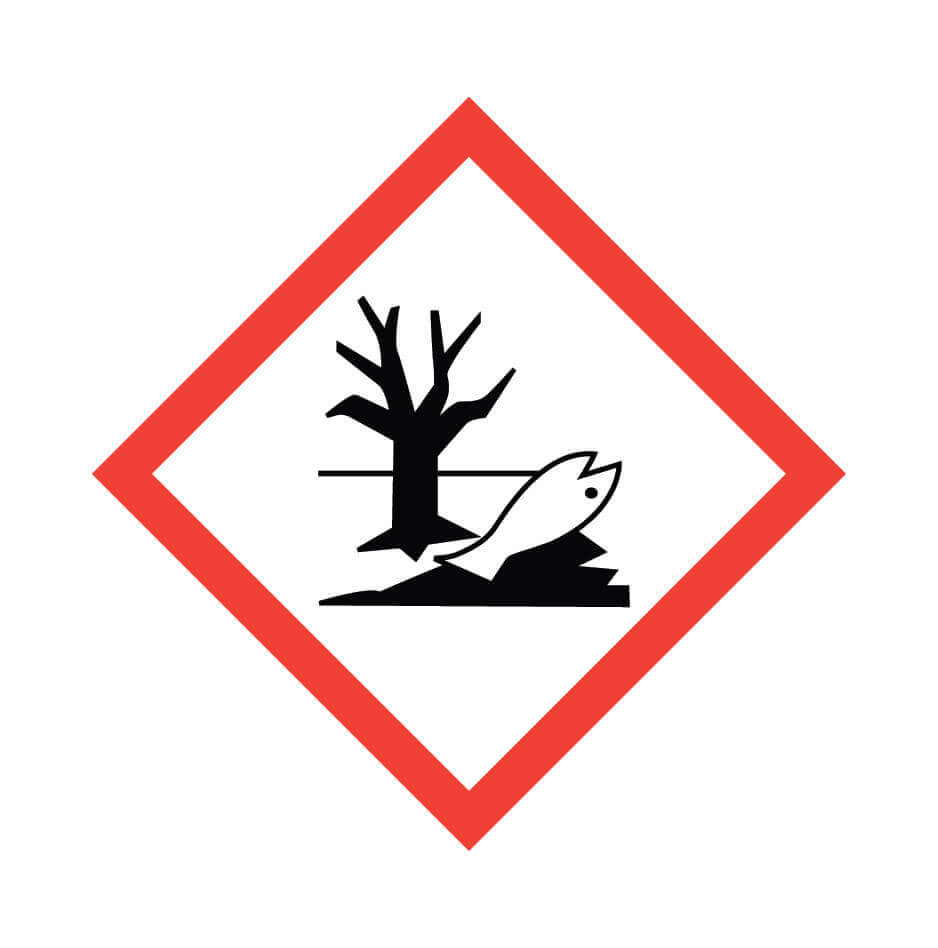 Portrays the standard skull and crossbones. Represents that the contents may cause acute toxicity (fatal or toxic). 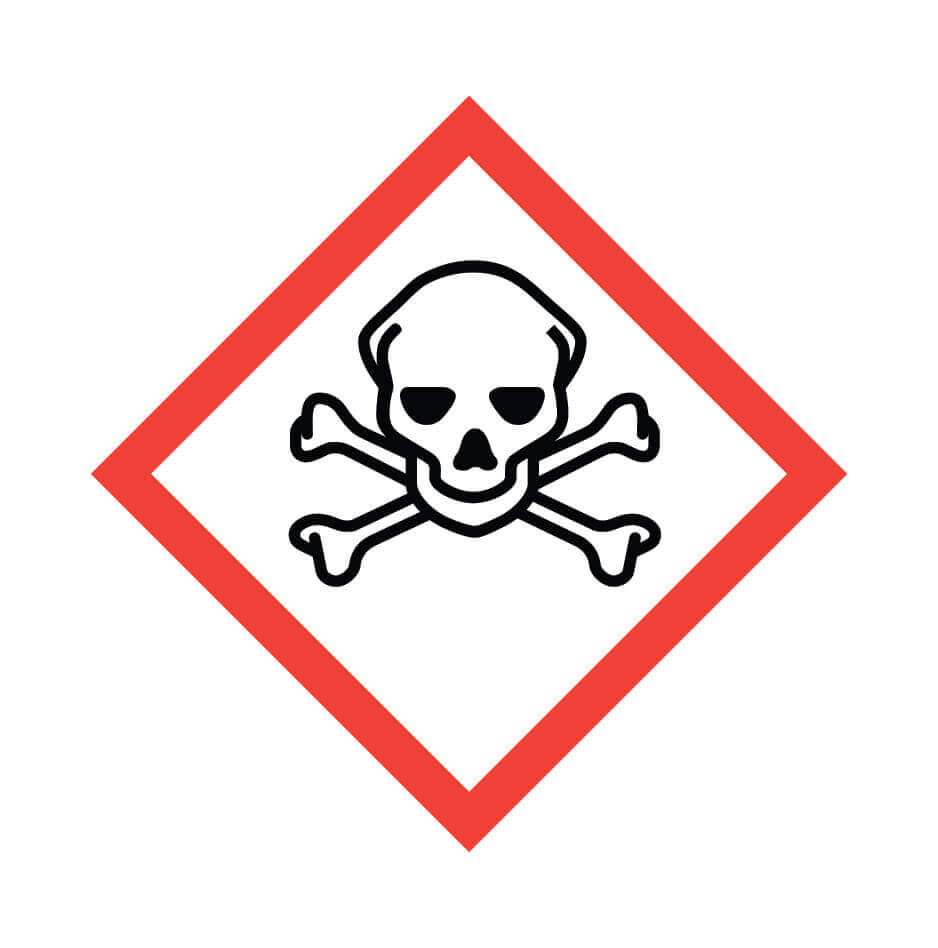 What Is a GHS Hazard Statement?

GHS hazard statements are specifically assigned to certain hazard classes or categories. These statements give more insight into the hazards associated with the product, including the extent of hazard when appropriate. For example, a Skull and Crossbones infographic may be paired with a hazard statement that says, "Fatal if swallowed," or "May cause damage to organs through prolonged or repeated exposure."

Each GHS hazard statement is also designated with a code, which is the letter "H" paired with a three-digit number. This code is meant for reference purposes when the actual statement needs to be translated, and each number within the code can signify a certain meaning. However, the full hazard statement must be written on the label. For example, code H350 means "May cause cancer."  Hazard codes and statements can also be joined together. For example, the three conjoined codes H300+H310+H330, all of which have their own designated meaning, would be accompanied by three hazard statements joined together: "Fatal if swallowed, in contact with skin, or if inhaled."

What Industries Use the GHS?

What Are the Benefits of the GHS?

The primary benefit of the GHS is the fact that chemicals can be more uniformly labeled and easily recognized by employees or handlers. Thus, better everyone has access to more consistent hazard information. Several other benefits have emerged, however, such as:

Through easily discernable classifications, categories, and pictograms, all chemical handlers can reap the advantages of safer work environments, easy compliance, and fewer problems with misidentification of a hazardous product. The flexibility of the GHS meets the varied needs of different countries while still creating continuity across nations where hazardous material classification and labeling is concerned. Lastly, the GHS keeps all workers safer within the global network of industries that work with hazardous chemicals.