No one can deny the dangers associated with influenza viruses. As viruses spread from wild animal populations to domesticated and farm animals, the risks of these diseases spreading from animals to humans (called zoonosis) becomes greater. This is why worker safety in the meat and poultry industry is critical.

Avian Influenza (bird flu) viruses are found in wild bird populations throughout the United States. Wild birds are hosts to the disease. The threat to people occurs when the disease infects poultry and spreads further because of contamination and human contact with the virus.

Sick birds not only affect food safety and workers, but they also cause a major disruption to the meat packing and poultry business. These birds die or are killed in the thousands to prevent infection of other birds or humans.

Avian influenza viruses are divided into two groups. Those groups distinguish the severity of the disease. The two types of bird flu include:

Both LPAI and HPAI viruses are associated with human outbreaks of the disease. The strains found in humans are H5, H7, and H9.

The Occupational Safety and Health Administration (OSHA) reports that epidemiologists who monitor the spread of the disease have observed occasional outbreaks of LPAI among commercial poultry flocks in the Midwest and Western parts of the U.S. since 1997. Since 2004, concerns over the spread of HPAI increased when an outbreak of H5N5 was detected for the first time in 20 years in the United States. Concerns heightened even more in 2015 after outbreaks were reported in commercial poultry flocks in 21 states.

The  World Health Organization for Animal Health is so concerned about the threat of the HPAI virus that it requires that all nations notify the organization when any strains of the H5 or H7 AIV (Avian Influenza Virus) are found in poultry.

This concern is well-warranted:

According to data from the Iowa Farm Bureau Federation (IFBF), the state of Iowa lost upwards of $1.2 billion in the 2015 Avian flu outbreak, due to the demise of 30 million hens and 1.5 million turkeys.

Authors of an additional study (conducted by the Decision Innovation Solutions of Urbandale, Iowa) also found that the outbreak also lead to a loss of 8,444 jobs—an impact of $427 million in lost wages and $145 million in lost taxes. The ripple effects were widespread: lost business was also felt for veterinarians, truck transportation companies, feed suppliers, lenders, and other financial institutions.

Sadly, once a flock of livestock is contaminated, the entire flock has to be destroyed. This necessary measure is a key reason why preventing cross-contamination among flocks is so essential.

According to the Centers for Disease Control and Prevention (CDC), and based on the few reports they’ve received of human infection from the Avian Influenza A virus, the disease is not commonly associated with people. But infected birds excrete the virus through their feces, mucus, and saliva. And virus cells can easily contaminate the air when they stick to moisture droplets, water vapor, or dust particles.

People could get sick if they unknowingly inhaled the virus (something that’s almost impossible to escape), or if they touch something that is contaminated with the virus and then touch their eyes, mouth, or nose.

It is worth noting that the rare cases of AIV that have been found in people most often occurred because the people who got sick had unprotected contact with contaminated surfaces, or when they had contact with diseased birds.

There is no vaccine to protect people from getting Avian Influenza, and in particular, HPAI and an H5 strain. Flu shots may be effective at helping people who have regular contact with poultry from getting suck from avian and Seasonal flu .

How to prevent bird flu in humans

Most reported cases of the Avian Influenza A affecting people occur in people who were exposed through direct or close contact with diseased poultry. Therefore, the CDC recommends that poultry workers on farms and processing facilities, and all other people who may have contact with infected birds, wear PPE or Personal Protective Equipment.

Their recommendations are as follows:

Create a dedicated area where workers can put on and remove poultry farm PPE. Contain all clothing worn around poultry to that area and contain single-use clothing for safe disposal.

Provide adequate protection, which the CDC lists as:

The Sequence for Removing PPE to Avoid Contamination

The CDC recommends that employers teach their workers to follow this protocol when removing poultry PPE after exposure to infected poultry.

ViroGuard® is designed to protect workers who are exposed to blood-borne pathogens and contaminants from poultry feces and bodily fluids. This product line should be considered as protective clothing for avian flu or avian flu PPE.

The first way that it offers protection is by keeping workers dry. HPAI H5 can be transmitted to people through droplets in the air, so having heavy-duty PPE that repels infectious contamination is critical. Reinforced seams add a measure of security to protect workers from liquid penetration.

When there's an outbreak of bird flu, don’t risk exposing your workers (or your livestock) to the High Potency Avian Influenza Virus. The more often poultry workers have contact with birds, the higher the likelihood that the virus could spread throughout your workplace and flocks.

International Enviroguard has the PPE you need to protect workers from avian flu. It’s an investment in their health and safety and a move towards ensuring a safer business place for everyone who works with or does business with your company. 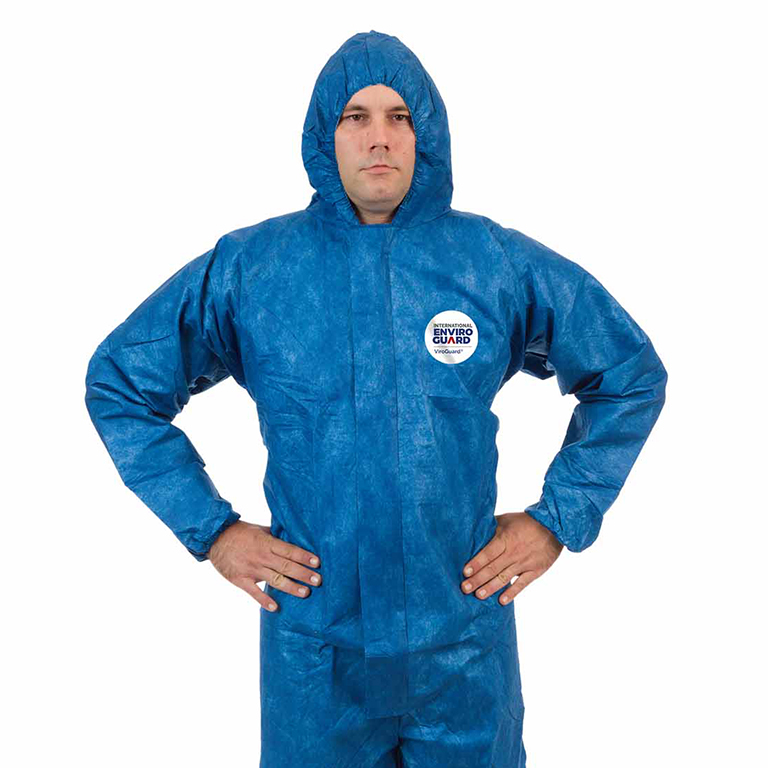 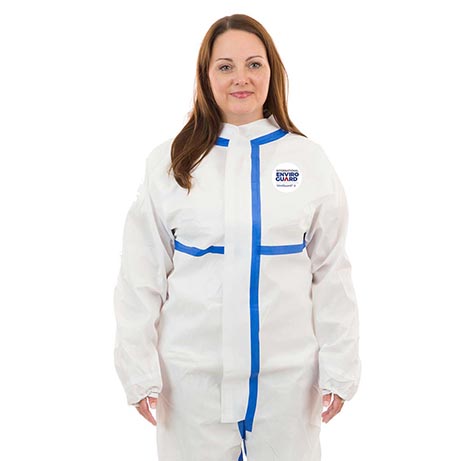 Enjoy impermeable protection with fabric and seams that pass ASTM F1670 (blood) and ASTM F1671 (blood-borne pathogens). Designed to meet the latest CDC standards for those working with PUIs who are clinically unstable or have bleeding, vomiting or diarrhea. Because of its unique design and protection factor, ViroGuard® 2 is the product of choice for most of the Regional Ebola and Special Pathogen Treatment Centers along with top key assessment facilities.